This Sheltered Housing Unit in Dublin, with 32 individual apartments consisting of a combined kitchen/living/bedroom space with a bathroom, was previously ventilated by a Passive Stack Ventilation (PSV) system.

Following extensive retro-fit works, which included improved insulation and air-tightness measures, it was found that the PSV system no longer had enough “background ventilation” (previously supplied by air leakage through the building fabric) to permit the effective operation of a passive stack. This, coupled with the building’s low-rise construction, lead to the decision to install a Demand Controlled Mechanical Extract Ventilation (DCMEV) system, featuring Aereco V4A constant pressure fans and BXC Extract Grilles.

Installation space for the V4A fan units was found in penthouse louvres on the roof, which previously served the original PSV system. Each V4A fan was connected, via the existing ductwork, to the kitchen areas and bathrooms of two apartments. The use of existing ductwork and the fitting of the fans in the Penthouse Louvres not only ensured that there was no loss of usable space in the apartments, but also ensured that disruption to residents during the ventilation works was kept to an absolute minimum.

The use of silent low energy Aereco V4A fans and humidity sensitive BXC Extract Units guarantees that each apartment is provided with a low energy ventilation system that ensures good indoor air quality at airflow rates modulated in line with measured demand.

This method of installation is to be used as a template for similar buildings across Dublin. 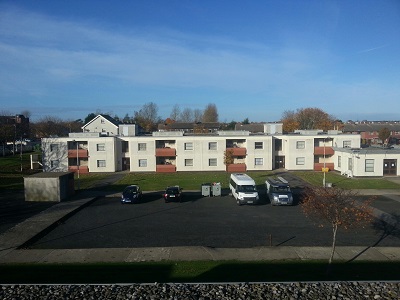